The agreement for a new Maritim Hotel in Szczecin was officially signed at the world’s largest travel fair, the ITB in Berlin, on Friday, 9 March 2018. Maritim’s portfolio will be enhanced by the 5-star hotel with 458 rooms and suites, which is due to open in 2021 and will be run on a franchise basis.

The new Maritim Hotel Szczecin (in the image on the left) is being developed in the Dąbie district close to the city centre and is located on a peninsula on the shore of Lake Dąbie, thus combining ease of access to the city with the natural beauty of the area surrounding the newly built marina.

Guests will enjoy an array of facilities including several restaurants, a lobby bar and a business club, as well as a sushi bar and a pub. The extensive spa area covering a generous 2,600 square metres offers peace and relaxation, with a range of pools, a jacuzzi, gym and sauna. The plans include a total of twelve conference rooms with capacity for up to 1,500 people to accommodate conference guests.

“We are looking forward to the completion of the new Maritim Hotel in the university town of Szczecin. Its fantastic location near the Baltic Sea and the rich array of historical attractions and top-class cultural facilities here give it a real edge”, explains Peter Wennel, Chief Operating Officer at HMS Hotel Management Services International GmbH. HMS, with its headquarters in Cologne, has been taking care of the expansion of Maritim Hotels abroad since 2004. 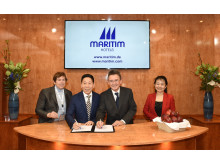