No Yes
Well-equipped: The Maritim Hotels management board with the owner and chairman of the supervisory board, Dr Monika Gommolla. From left to right: Roland Elter, Erik van Kessel and Hendrik Förster.

50 years of Maritim – an anniversary year with outstanding prospects

2018 – the best year for business in the company’s history

Maritim Hotels, Germany, celebrates its 50th anniversary and looks back on an extremely successful business year with a turnover growth of almost 15 million euros in Germany in 2018. At 147 million euros – around 8 million euros up from the previous year (139.2 million euros), the gross operating profit paints a similarly positive picture. In addition, the amount of revenue per available room (RevPAR) at Maritim has undergone above-average growth with an increase of around 4 euros. As in previous years, these positive earnings have exclusively been used to invest in the modernisation and renovation of the hotels. 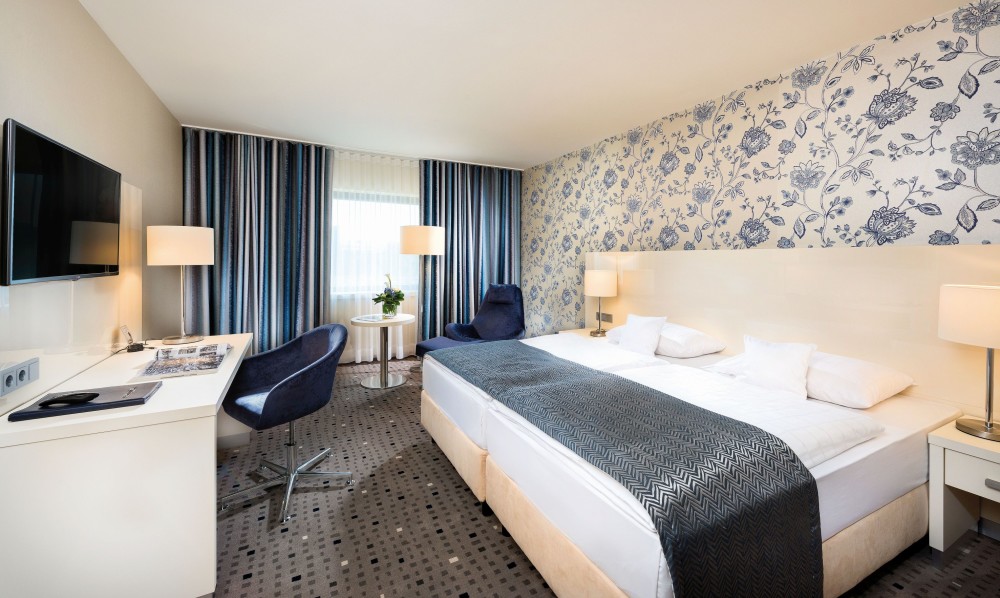 Investing in the future

Strengthening a quality brand and expanding the market share

‘Our goal is to further strengthen and expand Maritim as a leading quality brand in Germany. This is something that we are already doing quite well, as the high level of repeat bookings and positive feedback demonstrate,’ says Erik van Kessel (56), Chief Operating Officer and Labour Relations Director at Maritim Hotels. ‘Our guests greatly appreciate our modernisation efforts. This is why we also decided to replace a large proportion of the beds and bedding in all Maritim Hotels throughout Germany. When choosing the new beds, we opted for higher-quality mattresses, because what can be more important in a hotel than a good night’s sleep? A total investment of several million euros in our guests’ comfort,’ explains van Kessel.

Various projects in the area of digitalisation

Alongside the ongoing renovation efforts, the Chief Operating Officer has, above all, the areas of Revenue Management and E-commerce to thank for the ongoing positive business development. ‘Here we have been able to adopt different measures in many Maritim Hotels to expand market segments,’ van Kessel reports, going on to say, ‘We urgently need to look for new ways to continually optimise our work processes, as qualified personnel are always hard to find. For this reason, Maritim is installing different software solutions in the areas of service planning, purchasing and order systems, as well as supplier systems. We will get the most out of digitalisation for Maritim Hotels,’ he states with a view to the future.

Owner and chairwoman of the supervisory board of Maritim Hotels, Dr Monika Gommolla, is completely on board. In 2018, another proven expert in the field joined Erik van Kessel on the management board – Roland Elter (45) who was appointed as Chief Operating Officer for Sales and Marketing. The experienced management team is completed by Hendrik Förster (54) who has been the Chief Financial Officer since 2001.

Head of the group, Dr Monika Gommolla, adds, ‘Maritim is celebrating its 50th birthday with excellent figures, a multitude of renovated hotels and a management board that is focused on the future. That’s definitely something to be happy about, especially for us as an owner-managed family company. I still remember the opening of the first Maritim Hotel in Timmendorfer Strand in 1969 very well. It was a great moment seeing the first guests arrive,’ she reminisces. ‘So I would like to thank the many employees for their commitment and our guests for placing their trust in us over the decades.’

50 years of enthusiasm for Maritim

Maritim Hotels was also able to demonstrate this trust last year. For its high-quality service, Maritim was recognised as the leading company for customer satisfaction in a survey of over 800,000 customers from 2,200 companies across a range of sectors. Maritim Hotels not only claimed the highest overall ranking of all the companies involved but was also placed first among a total of 16 international and national hotel chains in the premium hotels category. The large-scale survey was conducted by the German newspaper Die Welt and the service quality and relationship management company Service Value GmbH.

In 2018 Maritim Hotels was also once again named as one of the best employers in Germany in a survey in the German economics magazine, Capital. ‘We are rightly proud of this fantastic achievement – especially in our anniversary year. High-quality, customer-focused service and high-quality training for new entrants to the hotel industry have been part of Maritim’s DNA from the very start,’ Roland Elter and Erik van Kessel sum it up together. Maritim Hotels was named “Top Trainer” in 2017.

The Maritim Hotel Paradise Blue Albena opens its doors to its guests on 1 April. The new Maritim Hotel on the coast of the Black Sea in Bulgaria is situated right by the fine, sandy beach and has more than 238 rooms, including 26 suites, 4 VIP suites and 8 studios. 15 rooms have a private pool.Guests will find a range of indulgent dishes in a total of four buffet and à la carte restaurants – the VIP Lounge, the Bistro, the Lobby and the Pool Bar. The hotel’s exclusive facilities also include a spacious spa and wellness centre with sauna, indoor pool and gym, as well as an outdoor pool, a children’s pool and water slides. The hotel’s disco provides evening entertainment. Three meeting rooms, accommodating up to 500, 140 and 80 people respectively, are available for our business guests. Maritim Hotels runs the hotel on a franchise-basis.

Work started on the new Maritim Hotel Stettin (Szczecin) last spring – with a slight delay, as only a few specialist companies in Europe are able to build the foundations of this extensive project in direct proximity to the port. ‘The investor is acting on the assumption of a 3-3.5-year building phase; opening is planned for the end of 2022,’ explains Peter Wennel, Chief Operating Officer of HMS Hotel Management Services International GmbH. HMS is part of the Maritim Group and is responsible for the hotel chain’s international expansion.

The new Maritim Hotel Stettin (Szczecin) is being developed in the Dąbie district close to the city centre and is located on a peninsula on the shore of Lake Dąbie. Maritim’s portfolio will be enhanced by the 5-star hotel with 458 rooms and suites, which will also be run on a franchise basis.

Maritim Hotel Pinghu is another new hotel scheduled to be built in the Chinese coastal province of Zhejiang near Shanghai.‘The opening is planned for 2022,’ explains HMS Chief Operating Officer Wennel. Predominantly aimed at Chinese business guests, Maritim Hotel Pinghu will have 320 rooms and suites and a capacity for conferences for up to 1,000 people. Furthermore, alongside a German and Japanese restaurant, an all-day dining restaurant, as well as a lobby and rooftop bar are also planned. Additional facilities include a spa and wellness area, with a sauna and gym.

The architecture of the new hotel is in the style of the Bavarian town of Rothenburg, which is very popular amongst Asian tourists. Peter Wennel goes on to explain the location, ‘Multiple international companies invest in Pinghu due to the excellent strategic location with direct transport links to major Chinese cities and large ports. The hotel project is on an industrial estate with predominantly German and Japanese companies.’ Maritim will run the hotel as a management company. Maritim Hotels has been active in the Chinese market since 2010, where it currently has three hotels.

Maritim in the Netherlands

With 579 rooms and suites and meeting facilities for over 4,000 people, construction of the largest Maritim Hotel, and at the same time the largest conference hotel in the Netherlands, is currently underway. However, the opening of Maritim Hotel Amsterdam is predicted to be set back to 2021. The reason for this is delays in the construction of what, with its 34 floors, will be the tallest building in Amsterdam. Maritim will be acting as the operator of the planned hotel, which will have fantastic views over the old town and the famous port of this major city in the Netherlands.

Successfully operating top-class hotels for half a century: Maritim Hotels (Germany) has reason to celebrate its ​anniversary year 2019. It all began with a visionary concept that soon became the trademark of the hotel group: “Daytime business and overnight accommodation under one roof”. This was the premise on which the company's first hotel opened in 1969.