Remco Gerritsen (47) is the General Manager of the new Maritim Hotel Amsterdam that is to open in 2019.

The native Dutchman has been working for Maritim Hotelgesellschaft since 1st April 2016 and will assist with the entire opening phase of this Maritim hotel, which, with its 579 rooms and suites, is to be the group's largest.

"With Remco Gerritsen, we have gained an extremely experienced manager of international stature. We are, therefore, really looking forward to welcoming him to the "Maritim Family", and are sure that he will help us make the opening of the largest conference hotel in the Netherlands a success," explains Dr. Monika Gommolla, chairperson of the supervisory board and owner of Maritim Hotelgesellschaft.

Remco Gerritsen will be holding various posts within the Maritim hotel group before moving this year to the opening office in Amsterdam. Gerritsen is currently working at the Maritim Hotel Düsseldorf. He is married and has a child, and speaks fluent German and English.

The Maritim Hotel Amsterdam will be the largest Maritim hotel so far, with a meeting capacity of up to 4,750 people, and the largest conference hotel in the Netherlands. The Maritim Hotelgesellschaft signed the lease agreement for the new first class hotel in Amsterdam's best city location back in 2014. With 34 floors, this 4-star hotel will be the highest in the city. The modern tower is being built directly opposite the main railway station, and guests will enjoy magnificent views of the old town and the city's famous harbour. 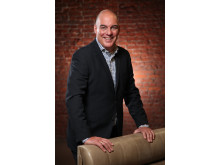 Remco Gerritsen (47) is the General Manager of the new Maritim Hotel Amsterdam that is to open in 2018.