The forecasts were exceeded, and total turnover reached 475.1 million euros, markedly higher than the previous year (2014: 448.2 million euros): Maritim Hotels can look back on a successful 2015.

“We managed to increase our operating income considerably compared with the previous year,” Gerd Prochaska, Chief Operating Officer of Maritim Hotels, was happy to point out. “Furthermore, the occupancy rate increased by 3.5 percent with almost the same room rate,” continued Prochaska. That's despite the fact that some of the hotels were not able to run at full capacity because of the renovation and modernisation work taking place in Munich, Cologne and Stuttgart, for example.

Maritim is pursuing its renovation offensive. In 2016, Maritim will continue to modernise its existing establishments. The hotels in Ulm and Koenigswinter are being renovated, and in Munich the remaining unrenovated rooms are being redesigned, while in Stuttgart the last renovation work will be finished by this summer. In the ClubHotel Timmendorfer Strand, a good third of the entire stock of rooms is being renovated. So, many of the 34 Maritim hotels throughout Germany have already been modernised in recent years. 1,000 bathrooms alone have been fitted with high-quality materials, such as black and brown granite, and with the latest sanitary technology, such as touch-bars and floor-level glass-only showers. By the end of this year, 1,500 bathrooms will have been completed.

In addition to extensive modernisation and renovation work, the Maritim Group is constantly pursuing new hotel projects. Maritim Hotels is to run a new 217-room establishment in Ingolstadt. It will offer its guests a main restaurant for 200 guests, a bistro, a café and an elegant hotel bar. The opening is planned for 2018/19, and the construction project investor is VIB Immobilien AG. As the largest provider of meeting and events facilities in Germany, Maritim has also been awarded the contract for running the conference centre that is currently planned for Ingolstadt. The planned hotel is to be located prominently in the city centre next to the Neues Schloss of Ingolstadt, on the Danube, and will be connected directly with the new and innovative conference centre of Ingolstadt.

On 1 April 2016, Maritim Hotels will be taking over the Hotel Saray Regency on the Turkish Riviera, near Side (Antalya). This 4-star hotel will operate under the Maritim brand; it has a total of 381 rooms, including family rooms, suites and two rooms equipped for physically challenged persons. Located at a distance of only 65 kilometres from Antalya airport and five kilometres from Side, the Maritim Hotel Saray Regency will offer all-inclusive service in addition to numerous water and other sports facilities, three outdoor pools including water slides, two indoor pools, as well as a spa and wellness centre for those seeking recreation and direct access to the beach, which is only 150 metres away.

The foundation stone for the largest conference hotel in the Netherlands is to be laid at the beginning of the summer this year in Amsterdam: There will be 579 rooms and suites with four-star-plus facilities and meeting facilities for up to 4,750 people, making it the biggest Maritim hotel so far. “We are already looking forward to the opening in 2019. Maritim has almost 50 years' experience in the conference and events business, so this project is particularly suited to us – and at the same time confirms the trust in our extraordinarily high level of competence in the first-class hotel business,” explains Dr Monika Gommolla, chairperson of the advisory board and owner of the Maritim Hotelgesellschaft.

Expansion into the European market is a strategic goal of the head of the group. The growth strategy is making strong headway in the Asian market. Two hotels in large Chinese cities with populations of over a million people are being built. Contract has been signed for another one. The go-ahead has been given for construction to start this year. Maritim Hotels is already successfully running three hotels in Chinese business cities.

On the Mediterranean island of Malta, Maritim is starting the season with a freshly renovated and extended establishment. The Maritim Antonine Hotel & Spa Malta has not only been fully renovated, but has also had another two floors added. “This means we can meet the gradually increasing demand,” says the General Manager, Peter Rieks, to explain the construction work undertaken. The Maritim Hotel in the picturesque location of Mellieha now offers 220 rooms instead of the previous 170. It's not only the rooms that have been fully re-designed. All public areas, such as the lobby and restaurants, have been given a fresh, brighter new look. The gardens and outdoor areas have been redeveloped, the spa area has been fitted with a new sauna, and one of the highlights is the new open-air restaurant on the roof terrace of the nine-storey building.

There are good prospects, too, for the Maritim Hotel Galatzó in Mallorca, which opened a year ago. The hotel took advantage of the winter break to have a facelift – all 79 room in the Llevante part of the building have been modernised. The carpet was swapped for parquet, and the rooms with a stunning sea view now offer an even fresher, brighter design. This elegant establishment, between Santa Ponsa and Paguera in an idyllic elevated location, is starting the 2016 season "fit for the summer".

It was also the “first anniversary” for the Maritim Crystals Beach Hotel Mauritius. This four-star establishment has lots of new things for its guests in 2016, such as the “Maritim Diving Center", the “Kite Surf Academy”, a second heated swimming pool (7 x 21 metres) and “The Cube” – the new club for teens. This means the hotel is now even more attractive for families and sports enthusiasts.

The Maritim Resort & Spa Mauritius is also celebrating! For 25 years, this five-star establishment has been offering an excellent service in one of the world's most paradisiacal locations. In this jubilee year, guests can look forward to a plethora of special events, offers and surprises.

Every third booking by Maritim clients is now made online. This is a trend that Maritim is developing by boosting direct sales, providing even more services and being even more attentive to client needs. Social networks are taking on greater importance: Maritim Hotels are on Facebook, Twitter and Google+, among others.

“Our high level of investments in renovation and cutting-edge events technology are paying off. This was borne out over the past financial year. The recently redesigned establishments, such as the Hannover Airport Hotel, the Maritim Konferenzhotel Darmstadt, the Maritim Hotel and Congress Centrum Würzburg and the Maritim Hotels in Bad Homburg and Stuttgart have enjoyed positive feedback from both business and leisure guests. This satisfaction is reflected as a whole in the bookings figures for 2016,” summarises Gerd Prochaska, the Chief Operating Officer of Maritim for the German market.

Looking at international business, Prochaska states: “Following the terrorist attacks, bookings in North Africa in particular have fallen dramatically. We regret this immensely, since in 2015 our four hotels in Egypt had good results compared with the previous year.” But things are looking up: the targets for the Canary Islands and Spain are taking advantage of the unstable market environment: “We are expecting a strong momentum for our international business, in particular from our recently renovated establishment in Malta, our Maritim Hotel Galatzó in Mallorca, the Maritim Hotel Tenerife and both our top-class hotels in Mauritius,”explains the Chief Operating Officer of Maritim Hotels. He finally adds: “We are very optimistic about 2016, with our investment plans and new hotel projects.” 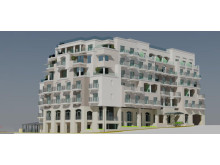 Illustration of the new M... 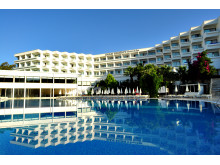 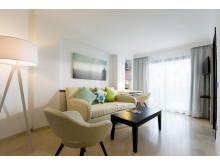