It is not only at the Hanover Fair, starting today (13th-17th April 2015), that India is the centre of public attention as the official partner country. At the Maritim Grand Hotel Hannover, too, preparations have been under way for weeks for an important visit from India: the Prime Minister of the Republic of India, H.E. Narendra Damodardas Modi, arrived at the Maritim Grand Hotel Hannover with his entourage for yesterday's official opening ceremony with Chancellor Angela Merkel.

The tightest security measures and various technical arrangements, such as the reception of Indian television transmitters, are just a few of the organisational challenges for General Manager Oliver Risse and his team. The hotel team also has to prepare for the considerable media interest. With the help of Deutsche Telekom and various technical partners a special additional Press Centre has been set up for the state visit.

The Indian Premier's arrival with a delegation of politicians, officials and aids, requires a total booking of 800 rooms – including all the available suites – for several days. Similarly, many meals will also be taken in the Grand Hotel – prepared according to the Premier's taste.

To make sure of this, the hotel has employed an Indian Head Chef – recommended by the country's embassy.

The Maritim Grand Hotel Hannover team has experience of playing host to international heads of state and high-ranking politicians. Just recently, the Chinese Vice-Premier Ma Kai was a guest, with his delegation, during the CeBIT trade fair.

For his visit to Germany, Premier Modi relied on the experience of his predecessor, Manmohan Singh, who was Prime Minister of India from 2004 to 2014 and previously came to the Maritim Grand Hotel Hannover with an industrial delegation in 2006. 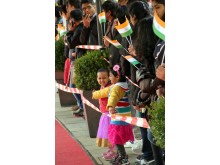 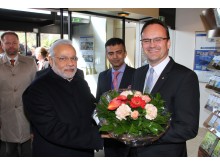