With extensive refurbishment and investment measures, new hotels in Europe and abroad and optimised sales structures, Maritim Hotels is more than satisfied with its business development and is looking positively to the future.

In addition, extensive renovation and modernisation works have led to restrictions in ongoing hotel operations. Many premises could not be used for several months, for example, at the Maritim Airport Hotel Hannover, which has been owned by Maritim Hotels since 2014. The renovation work there has now been successfully completed – the rooms, bathrooms, parts of the common areas and the meeting and convention areas have been renovated and the technology has been updated, in several phases. “The Maritim Airport Hotel Hannover has become much more attractive, especially for business travellers, who appreciate it because of its proximity to the airport. We therefore expect a marked increase in sales at the hotel,” said Gerd Prochaska, Chief Operating Officer at Maritim. The extensive modernisation works will be continued in the current fiscal year in the Maritim Hotels in Munich, Wuerzburg, Stuttgart, Cologne, Kiel and Travemuende. The majority of the rooms are being radically redesigned with innovative bathroom concepts being introduced. Since 2014, all Maritim rooms in Germany have also included free WLAN access.

Internationalisation strategy: In 2018, Maritim will enjoy a presence in Amsterdam, re-open in Majorca and open new hotels in China.

It is full steam ahead for Maritim in Amsterdam: In 2014, Maritim Hotels signed the lease for a new top-class hotel in Amsterdam's prime location. With 34 floors, the new hotel will be the highest in the city. The modern tower is being built directly opposite the main railway station, and guests will enjoy magnificent views of the old town and the city's famous harbour. The future Maritim Hotel with 579 rooms and suites will be the biggest in the chain as well as the largest convention hotel in Holland with conference facilities for up to 4,750 people. Based on current plans, the project is due for completion in 2018. “One important strategic goal is to further expand our market presence in Europe's major cities. In this respect,we have made a decisive step forward,” said Dr Monika Gommolla, owner of the Maritim Hotel Company and Chair of the Supervisory Board.

Since 1st March this year, Maritim Hotels have once again enjoyed a presence in Mallorca. The legendary Hotel Galatzó has reopened its doors after renovations and is once again flying the Maritim flag, as the hotel was already part of the group from 2007 to 2009. Located on an idyllic hill between Santa Ponsa and Paguera, the Maritim Hotel Galatzó boasts 172 comfortably furnished rooms and suites. The hotel has eight rooms for meetings, conferences, banquets and private parties, ranging in size from 38 to 426 square metres.

www.maritim.de: Online booking up by over 50 per cent

The success in boosting direct sales is also a cause for optimism. Since the relaunch of the Maritim website exactly a year ago, the Maritim Hotel Company has posted an increase of over 50 per cent in online bookings. The great success of the new site can be attributed primarily to the identical booking engine shared between the desktop website, mobile website and smartphone app. Browsers thus find themselves at all times in a familiar booking environment and can choose between seven languages: German, English, French, Italian, Spanish, Russian and Chinese.

“Due to the optimisation of direct sales and the highly promising outlook for bookings, 2015 looks set to be a very good business year,” predicts Maritim's Chief Operating Officer, Gerd Prochaska. “We expect strong momentum this year from the newly renovated Congress Center Würzburg, which has just been reopened after a lengthy extension process,” he added. The Maritim Hotel Würzburg is directly connected to the Congress Center on two levels. With its generous, flexible interior design and modern aesthetics dominated by glass, the Maritim Hotel and Congress Centre now provide space for events for up to 1,635 people.

Prochaska offers a more qualified response on the international business front. “Due to the generally tense political situation, bookings are still not satisfactory at our four Egyptian hotels. The ongoing conflict in Ukraine has also had a generally negative impact on the tourist industry. However, we are assuming that, in 2015, we can make up for the resulting drop in bookings.” 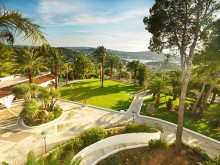