No Yes
Stunning: the new restaurant and bar complex at the Maritim Resort & Spa Mauritius.

Bad Salzuflen, Germany – Following its 50th anniversary year, the hotel group has entered the new decade with a raft of investments and projects and can once again look back on a very positive performance in 2019.

Despite the economic slowdown and a slight rise in costs, Maritim Hotels achieved very good results, with a significant increase in turnover of 11.5 million euros compared with the previous year (2019: 421.6 million euros). And just as importantly, very satisfied guests. This due in no small part to the extensive refurbishment of the Maritim Hotel Bonn and large-scale investments in new box-spring beds, mattresses and bed linen at all Maritim Hotels in Germany. The group's average overall ratings on online portals are one indicator of this customer satisfaction. In the TrustScore, Maritim saw an increase of two percentage points, taking its average to 82.

Maritim is continuing to invest heavily in modernisation work over the course of this financial year. At the Maritim Hotel Würzburg, the external façades and all the bathrooms are being refurbished, with the bedrooms and communal areas to follow.

At the Maritim Hotel Bremen, the bathrooms, along with the sauna and swimming areas, have all been updated. Extensive renovation work will begin this year on all the rooms at the hotel which enjoys a central location next to the exhibition centre. 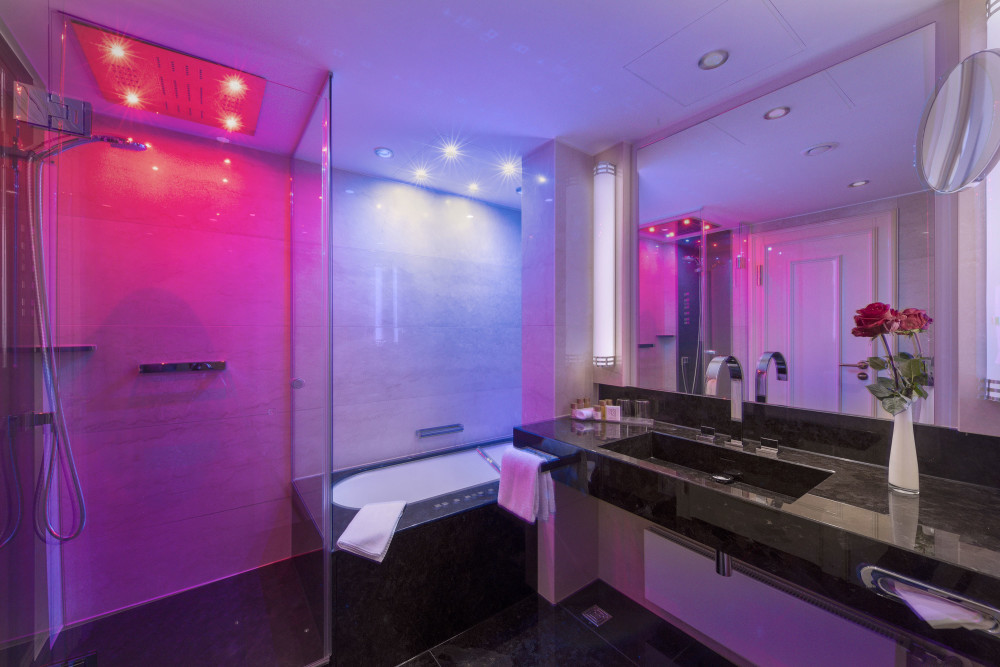 Atmospheric colours in the new bathrooms at the Maritim Hotel Bremen.

Guests at the Maritim Hotel Kiel are also enjoying a fresh, bright design. The communal areas, restaurant and halls here have all been fully refurbished. 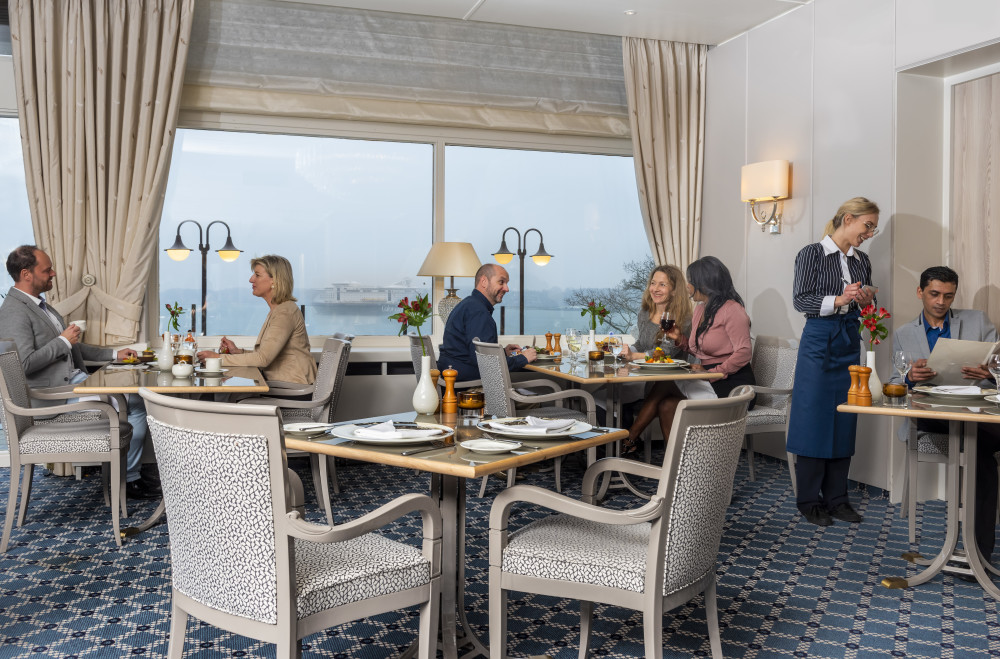 Freshly renovated with a wonderful view: the restaurant at the Maritim Hotel Bellevue Kiel on the banks of Kiel Fjord, Germany.

And the bathrooms at the Maritim TitiseeHotel are undergoing an extensive programme of modernisation while the remaining unrenovated rooms are being fully redesigned.

“We are delighted that our positive performance to date allows us to invest in our rooms and provide even greater comfort and service,” says Erik van Kessel, Chief Operating Officer and Labour Relations Director of Maritim Hotels. “This ensures even higher customer satisfaction and will further increase the appeal of Maritim Hotels,” he adds.

Maritim also continues to be an attractive employer. The hotel group has yet again been named one of Germany’s best training providers. “Maritim attained all five stars in the nationwide survey. We are very proud to receive the highest score once more,” says Van Kessel. The survey is conducted by the magazine “Capital” in conjunction with the talent portal Ausbildung.de and HR marketing specialists from Territory Embrace. As part of the research, interviews were conducted with more than 700 companies into their training standards.

The largest renovation project is currently under way at the Maritim Resort & Spa on Mauritius. The stunning culinary hub is already complete. It stands in the ruins of Balaclava, a former powder mill built in the 18 th century which is now a national monument and houses the elegant brasserie-style “Anno 1743” restaurant. The hub is also home to “The Distillery”; a bar that boasts the island’s largest rum collection. A second bar, “The Nest”, is situated on the roof of the brasserie. 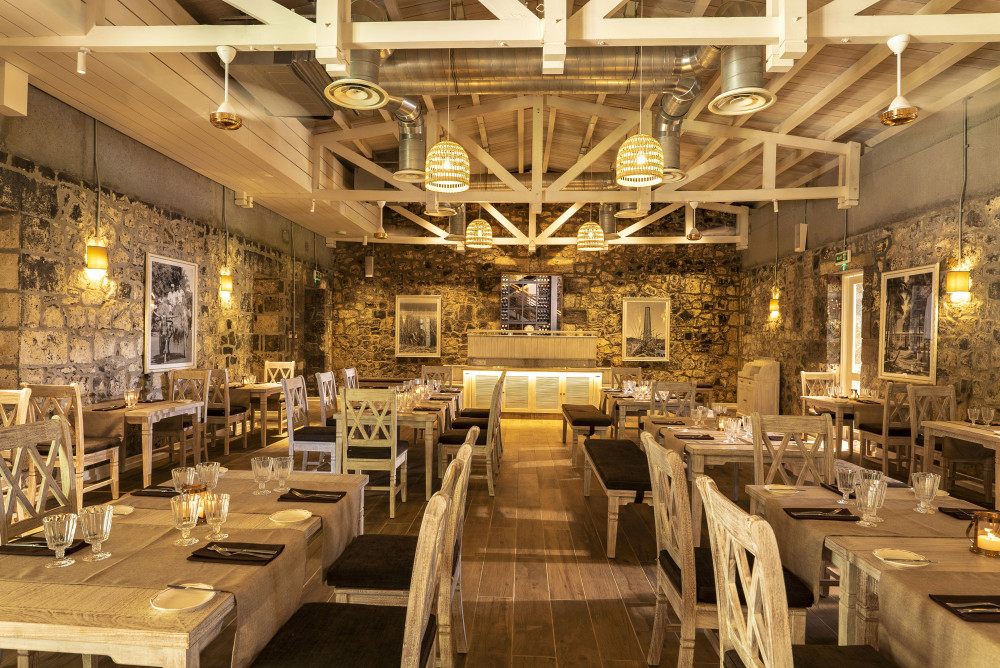 The chic industrial look: the “Anno 1743” restaurant, built into the historic walls of a former powder mill.

Extensive renovation and extension work is currently under way at the 5-star establishment at romantic Turtle Bay, ensuring that it will offer even greater luxury. A temporary closure will therefore begin in February this year. The hotel, boasting an extra 60 rooms and an additional pool, will then reopen at the start of December 2020, following the large-scale modernisation programme.

“We are closing in the interests of our guests. We were not prepared to expose them to the inevitable noise and upheaval caused by the building works,” explains Peter Edler, General Manager at the Maritim Resort & Spa Mauritius. He adds: “The new building will offer generous-sized rooms, perfect for families. The 60 rooms are a minimum of 55 square metres and are designed to accommodate two adults and two children in comfort.” It also promises luxury: the new building boasts its own infinity pool whose edge appears to merge with its surroundings.

Bulgaria’s first Maritim Hotel opened last April on the Black Sea coast. The Maritim Hotel Paradise Blue Albena, which has more than 238 generous rooms and suites, is situated next to a fine sandy beach. 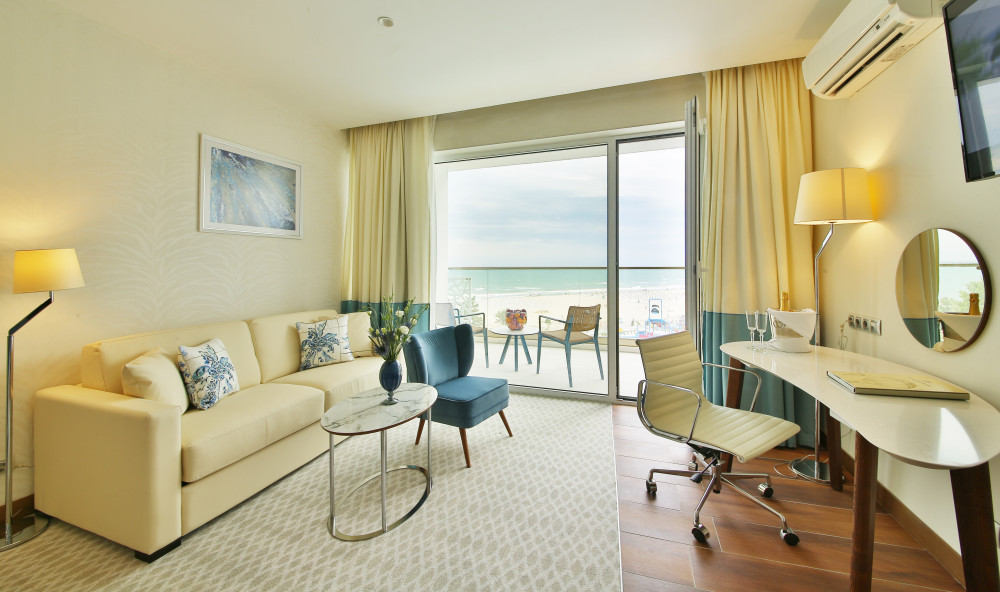 The Maritim Paradise Blue Albena in Bulgaria has a fabulous location next to the fine sandy beach.

Albania’s first officially certified 5-star hotel, the Maritim Hotel Plaza Tirana, came hot on its heels in October 2019. The hotel was formally opened in the presence of Albania’s Minister for Tourism Blendi Klosi, the German ambassador Peter Zingraf and other invited guests from the worlds of business and politics. 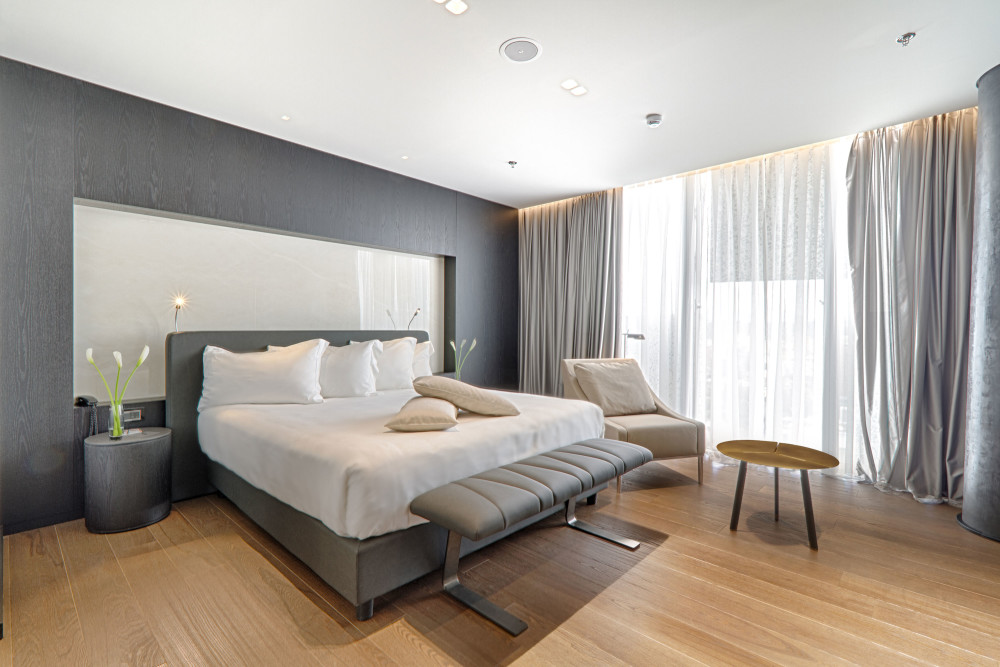 Centrally located at the heart of the Albanian capital, the new Maritim Hotel is surrounded by tourist attractions, renowned museums, the National Theatre and a wide array of shopping facilities. It is also just 15 kilometres from Tirana International Airport. The hotel has 190 rooms and suites on 23 floors, with several restaurants and a modern spa and fitness centre, as well as four meeting and conference rooms which boast state-of-the-art technology and can accommodate groups of all sizes. The Maritim Hotels in Bulgaria and Albania both operate on a franchise basis.

Following significant delays on the site in the Overhoeks district, building work has now restarted. With 579 rooms and suites and meeting facilities for over 4,000 people, construction is under way on the largest conference hotel in the Netherlands.

Maritim will be acting as the operator of the planned hotel, which will have fantastic views over the old town and the famous port of this major city in the Netherlands.

Union Investment has taken over the financing of this building project, which is currently scheduled to be completed by the start of 2023.

Alongside extensive renovation projects at home and abroad, and our further national and international expansion, we are currently making significant investments in digitisation.

New software solutions have been installed in our business intelligence, purchasing, ordering and supplier systems. Electronic staffing rotas are also in the pipeline for all German hotels in the Maritim Group. “This is designed to make staffing and holiday planning much more straightforward and efficient. The same applies to our payroll department.” Summing up the ongoing optimisation of work processes, Chief Operating Officer for Operations and Labour Relations Director Erik van Kessel adds, “We are also rolling out application software at present which will simplify and speed up the process for contacting potential new employees”.

Meetings and accommodation under one roof